"This is not what I want, but if it is what the Creators planned, then it is what I must do."

This page is a work in progress :)

Variana is small for an elf, barely standing at 5'2" (157.48cm), with a slim build. Tanned and freckled skin is offset by bright cyan eyes. A scar lines her lip and her right eye, both from accidents in her childhood. Her vallslin is June's vallslin, a deep shade of berry purple. People say that she always looks "sad", but that's just how her face is.

Variana is quiet and shy, and in her childhood rarely talked to others in favor of her studies of Dalish history and magic. Introverted to an extreme degree, Variana is cautious and wary of others, but warms up quickly to her friends. Caring and sweet, it is hard for her to be mean and intimidating towards others, and she always looks for the good in people.

After Solas disappears post Corypheus-fight, it is discovered that she is pregnant with his child, a secret she bears for months until it is too obvious to hide. A freak accident causes her to lose her child, which nearly destroys her. After mourning the loss (which she never truly gets over), Variana pulls herself up and forces herself to grow up fast. A lot of her naivety about the world disappears, and Variana goes from being a shy mage to a true leader of the Inquisition for the first time since she was granted the title.

After the end of Trespasser, Variana enters a relationship with Blackwall. The two of them explore Thedas, spreading hope and helping others heal while they heal together. Blackwall and Variana keep a home near Clan Lavellan, and after a few years, they welcome Gordon Gabriel Lavellan-Rainer into the world.

Possibly the most complicated relationship Variana has ever had with another person. At first, she views him as a protector of sorts, ignoring the odd twinge of emotions in her chest whenever he acknowledges her. In another world, maybe there could have been something between them, but Variana fell for Solas hard and fast. Then, Blackwall becomes her closest friend, a confidant who she trusts everything with. When Revelations occurs, Variana is stunned, and pours all Inquisition efforts into getting the man who calls him Blackwall out of jail. Once he speaks his crimes in front of her, Variana is heartbroken: who is this man that she trusted so much, that she felt such strong emotions for, who now spits at her feet and says that she's no better than authority figures who abuse their power? Still, Variana cannot find it in her heart to send the man to the gallows, so she gives him a second chance at life as himself, as Thom Rainer. It takes a while to mend their fractured friendship, but not as long as she expected.

Post-DAI, when Solas leaves and her pregnancy is revealed, Blackwall steps up to help Variana. After the loss of her pregnancy, Blackwall is the one who stays by her side through it all and helps her get back on her feet.

Their friendship starts off rocky, with Cassandra believing that Variana is responsible for the death of the Divine. But over time, the two women come to an understand regarding the circumstances of her death, and from there a friendship forms. Variana views Cassandra as sort of an older sister, someone to rely on and teach her about the world in ways she never imagined.

Cole and Variana have an odd sort of friendship. Variana knows to be wary of spirits (her mage training has more than taught her that fact), but Cole is more man than spirit. Even though she chooses to help him get more in touch with her spirit side, there's still something unnervingly human about him that she just cannot shake. During and after Trespasser, Cole and Solas' link is worrisome at best, frightening at worst, and Variana truly does not know how to react to the man.

Surprisingly, Variana and Cullen grow rather close over the events of Inquisition. Variana helps get Cullen off of lyrium, and Cullen shows Variana what it means to be a strong leader even at your weakest. Together Variana and Cullen bring down Samson, and Variana turns Samson into an agent for the Inquisition, working under the Commander. Cullen shows Variana what good Templars can look like, and Variana shows Cullen what good mages can look like, since their experiences with the other have more often than not been negative.

Dorian and Variana are thrown into a fast friendship with the events of In Hushed Whispers. Though coming from wildly different background, they find common ground and Variana even challenges misconceptions that Dorian holds towards elves and his questionable views on slavery. Dorian, in return, helps expand Variana knowledge of magic and shows her skills that can only be learned in a society that views magic so favorably. He becomes a magic tutor towards her, and nearly sways her into becoming a Necromancer. Even after she declines the specialization choice, the two are still friends, and Variana misses him terribly once he goes back to Tevinter.

Iron Bull (and the Chargers)[]

Bull and Variana get off on the wrong foot when they meet, as Bull describes Variana as "exactly his type" (tiny, shy, and redheaded), and that puts Variana off. However, Bull is quick to rectify his choice of words, and from there a friendship blossoms. Within the Chargers, Variana gets along best with Krem and Dalish.

Variana was rather intimidated by Josephine at first, because she was the first true noble the Dalish Elf ever met. But Josephine showed that she was not like the cruel nobles Variana had heard about in rumors from her clanmates, but a kind human with a willingness to help Variana in the aspects of life she had not learned about due to being Dalish. Josephine was a huge help towards Variana, and as a result, the two women became close friends. The Winter Palace was their only true test of friendship, as Variana refused to keep on the delicate heels that she (and Vivienne and Leliana) insisted she wore: when Josephine caught sight of her dancing with Grannd Duchess Florianne barefoot, the Ambassador nearly fainted on the spot.

There are two reasons why Leliana became Divine in Variana's worldstate.

Sera and Variana started off tense: Variana could not understand why Sera hated her "elfyness" so much. All Variana wanted to do was try to connect with the woman, since out of everyone in the Inquisition, they were the closest in age. But over time, Variana came to realize everything that Sera went through during her childhood and how that influenced her outlook on life, and once the two women were able to reach a compromise, they became incredibly close. Sera teaches Variana how to loosen up and live life, and Variana teaches Sera that magic is not something that is fearful as she believes it to be.

Variana actually knew of Varric before the events of Inquisition: Tales of the Champion had made its way to Clan Lavellan through trade from travelers passing through the area. Variana devoured the book, and was extremely excited to meet the author whose writing gave her a good look at a life outside of the Clan. Varric also gave Variana the nickname V, because it was "short, sweet, and to the point, just like her."

Vivienne becomes a sort of motherly figure towards Variana. She's everything the elf ever wanted to be: confident, smart, beautiful, and extremely talented with her magic. Also the uncanny resemblance to Variana's mother (minus the elf ears) makes Variana even more endeared to the Enchanter. The friendship that forms between the two women influences Variana's decision to become a Knight Enchanter. Variana respects the woman so much that she ends up referring to her as Hahren Vivienne at times, and Vivienne is flattered when she learns just how much weight that title holds in Dalish culture. Vivienne helps Variana grow into a confident mage and a confident woman, and without her guiding hand, Variana would have surely been lost in her darkest moments.

Variana's little brother -- who's not so little. Measuring in at 6'5" at the age of 16, if not for his ears and vallaslin, Alris could easily be mistaken for a human. Variana loves her little brother, who is the apprentice halla keeper to their father. Alris, in return, loves his big sister and yearns for her return to Clan Lavellan. After hearing news of his sister becoming Inquisitor, he begs Cyrnarel to let him join the Inquisition; instead, they reach a compromise, and he travels with the Clan to bring Variana a chunk of the Halla herd for the Inquisition to tend to. During the events of Trespasser, Alris does sneak away to join the Inquisition as a Red Jenny, but when Variana discovers him, she's quick to send him back to Clan Lavellan. Even though his disappointment, Alris knows to trust his big sister, and he loves her dearly.

Coinciding with the same characters as Thedas Unsolved,the Lavellan Family AU is where Variana and her younger brother Alris are the adopted children of Gabriel Lavellan (along Aeris Lavellan). after a raid on Clan Lavellan ends in the death of their parents. In this AU, Gabriel is the Inquisitor, and Variana (alongside his daughters Sildelona and Emer) travels to Skyhold after word reaches Clan Lavellan of what happened to their father. Variana falls in love with Solas, who removes her vallaslin, and then disappears after the defeat of Corypheus. She comes to discover that she is pregnant with his child, which she later loses in a freak accident protecting her sisters. Though broken, hurting, and furious at her father for choosing her life over the life of her unborn child, Variana eventually learns to trust and love again, and comes to terms with what has happened to her. In this AU, after the events of Trespasser, she ends up with Blackwall/Thom Rainer. 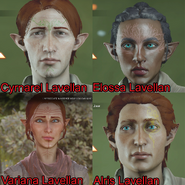 Variana and Solas by codenameyan on tumblr
Community content is available under CC-BY-SA unless otherwise noted.
Advertisement