"All of this happened because of fanatics and arguments about the next world. It's time we start believing in this one."

Initially hailed as the Herald of Andraste, she would later become the second Inquisitor of Thedas.

Standing at 1,84m, Solea has a tall, brawny body and long muscular legs suited for someone who is trained to fight with a heavy two-handed sword. Most of her weight comes from her muscles, but her weakness for tiny cakes can influence her weight in a negative manner. But her combat training easily evens this out. She has a rosy, healthy skin colour, and her face is covered in freckles.

She has a scar on the left side of her face, crossing over her eye. She gained it when she was physically thrown into the Fade when the Temple of Sacred Ashes exploded.

She wears her white blonde hair in a short, ruffled pixie cut style.

She has the typical light blue eyes that are very common in her family.

As a child, Solea was really reserved and shy and hated to be the center of attention. She'd get all nervous and flustered in the blink of an eye, and she was prone to crying when something was too much for her. Her parents were really strict and paid more attention to her older siblings, so she was always afraid to make a mistake and be punished. She also was a little bookworm. One of her favourite stories was the story of Ser Aveline, the first female Chevalier. She was impressed by Aveline's strenght and bravery, and admired the woman for going her own way, despite the dangers she faced. And even though the tale had a rather sad end – Aveline was killed, but posthumously knighted as a Chevalier – she was one of the reasons why Solea decided to become a warrior herself.

As an adult, Solea still retains a bit of her shyness, as she is very reluctant to make big decisions and dislikes being the centre of attention. She grew a sense of humour, which she often uses as a defense mechanism to hide her true feelings. She is honest, thoughtful and open-minded, but tends to be pessimistic. She believes in giving people a second chance and tries showing mercy whenever she can.

At first she was overwhelmed by her role as the inquisitor, but after some time she slowly but steadily grew into the role of a leader who could make hard decisions. As more time passed by, her willingness to show mercy waned. The ruthless world had left its mark on Solea, and she accepted that sometimes killing was the best solution.

Solea was born on the 4th Kingsway 9:18 Dragon to Bann Seymour Trevelyan and his wife Charlotte.

Living a sheltered life in the Trevelyan residence, she didn't have much contact with other people when she was a child, people that weren't her family or the staff. She was often nervous and distrustful around strangers and only really got along with her brother Rowan and some members of the kitchen staff.

When she was 7 and Rowan was 10, her brother's magic surfaced for the very first time. He was subsequently sent to the Circle of Magi in Ostwick, and Solea lost her closest friend.

When Solea turned 12, she begged her parents to let her train swordfighting. Despite her parents initial wish for her to become a Chantry sister, they reluctantly agreed and hired an experienced swordfighter to teach her.

When she was 17, Solea had a - sadly - short-lived relationship with an elven maid. Unfortunately for her, she was caught right in the act by her own sister, who immediatly told their parents about Solea's affair. Having shown racist tendencies towards elves before, her father fired the elf instantly. Solea was regarded as a disgrace to the family from then on, a reputation she would never truly get rid off.

After disbanding the Inquisition, Solea and Cullen moved to Amaranthine in Ferelden to live a life in peace and privacy, free from all the burdens of leading a huge organisation. One of the first things they did was visiting Cullen's siblings, who warmly welcomed their new sister-in-law into their family.

Solea occasionally meets with Sera, and the two go on Red Jenny business together.

Solea's relationship with of her family has always been rather difficult and strained. They were always very strict and conservative, and to make matters worse for a nonbeliever like Solea, very religious and devout. On top of that, her family is known for vying for power and status - if Solea didn't know better, she could swear they were Orlesian.

The relationship between Solea and her parents was always marked by indifference from both sides. As the youngest child of five, Solea had no chance of becoming the heir, and her parents would have loved to see her married off for political reasons or at least become a devout chantry sister. Unfortunately for them, Solea resisted both ideas. Solea had made too many missteps (having a relationship with a servant, her lack of faith, her dislike of Orlesian politics) and was never in their good graces. Her parents were disappointed when they learned that she had a relationship with a mere commoner, even if said commoner was the commander of the Inquisition. But they did like Solea's status as the inquisitor and shamelessly used it for their own gain.

Solea openly denounced them at first and called them out for using her status, which only angered them. With the help of Josephine, she was able to negotiate an agreement between her and her parents, in which her parents swore they would stop using their daughter's influence for themselves. Solea however was dead to them after that, and they didn't wish to see her again.

Richard is 21 years older than Solea, and barely ever had any contact with her. He doesn't care about her at all and is focused on his own family instead. Edric and Alys are mostly indifferent towards her. Alys is jealous that Solea has much more influence and importance than her, all achieved in a much shorter span of time. Sometimes she tries to use Solea's influence for himself. Edric is a devout Andrastian and a Chantry brother and has always disapproved of Solea's atheistic mindset. The two of the spent mostly arguing with each other. After Solea fully cut ties to her family with Josephine's help, her siblings never mentioned her by name again.

Rowan, the second youngest of the family, is a mage and the only one who had ever gotten along with Solea. Both were pretty close as children, which sadly changed when it turned out Rowan was a mage. But even after that, Solea tried to visit him as often as possible in the Circle. Rowan is really proud of what his sister has achieved and continues to support her however he can.

Rowan surprisingly visited her in Skyhold after the Mage-Templar war. He always had been her favourite brother, and when the Mage's rebelled she had been worried for him. Fortunately he had hid back home with his parents in Ostwick and did not come to harm. After the Mage-Templar he managed to contact Cullen, and together they formed a plan for the surprise visit. Solea really couldn't believe her eyes when her brother was suddenly standing right in front of her, and she pretty much jumped into his arms.

Bernhard Trevelyan and his family

Bernhard, like Solea herself, is a black sheep of the family. He never cared for living a privileged, luxurious life living in a mansion or all the scheming the Trevelyans like to do, but prefered to travel the world. When he travelled to Amaranthine in 9:20 Dragon, he met and fell in love with a local Fereldan merchant, a woman named Anna. Bernhard decided to move to Amaranthine for good, and a year after their marriage, Anna gave birth to their son Jacob. Bernhard's marriage to a commoner displeased the Trevelyans, and a few of them cut all ties to him altogether. Neither Anna nor Jacob were ever acknowledged as Trevelyans. Bernhard is Solea's favourite uncle. She visits him and his family once a year and enjoys her time with them a lot.

Aya was an elven maid servant employed at the Trevelyan mansion.

When Solea was 17, the two entered a short-lived relationship. Aya and Solea were caught by Solea's sister while making out. Alys went straight to their parents and told them about Solea's affair. Seymour Trevelyan, visibly upset by Solea's shameful behaviour and guided by his racist tendencies, fired the elven servant on the spot. Solea was grounded, and later regarded as a disgrace to the whole family,

Solea secretly tried to contact Aya, but the elf didn't want anything to do with her anymore. 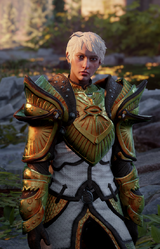 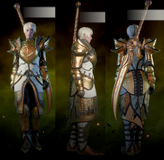 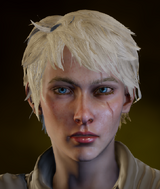 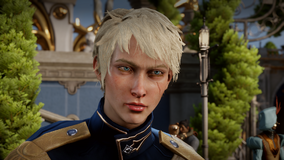 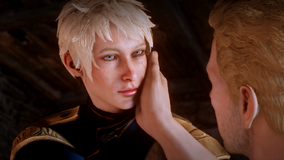 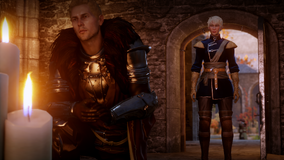 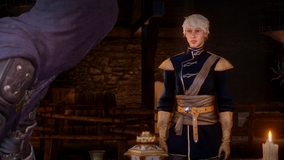 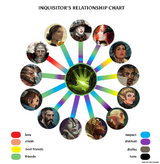 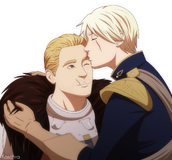 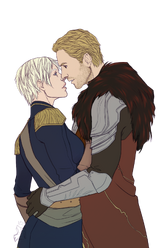 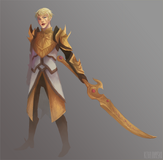 Solea by drovad
Community content is available under CC-BY-SA unless otherwise noted.