"Is it too much to ask that we be treated like people?"

Rodrik Trevelyan is a human mage and a former member of the Ostwick Circle of Magi. He is the twin brother of the Inquisitor, Elise Trevelyan, and briefly held the title of First Enchanter in the newly independent Ostwick College of Magi. However, he resigned after only six months in the position and currently lives in Antiva with his love Josephine.

Rodrik shares the bright red hair and green eyes of his sister. After taking a sword to the face by a Templar during the Circle's uprising, he grew a beard to hide the worst of the scarring. Three years on the run made him fairly physically strong and muscular, something a fair amount of people find surprising.

In contrast to his more outgoing sister, Rodrik is more quiet and introverted most of the time, really only opening up to his closest friends and loved ones. After most of his family disowned him for being a mage, the only family member he still talks to is Elise. Those who get to know him describe him as kind and intelligent, and eager to help those in need.

As a result of being abused by a Templar in the Circle, Rodrik doesn't really trust the Circle of Magi. He thinks that mages need to have a safe place to study and some sort of oversight, but he doesn't think that the Chantry has any place controlling it. He's not sure if mages should be completely free, but he's sure that they should be treated like people and not held under the thumb of an organization that clearly doesn't have their best interests in mind.

Rodrik is very skilled in Spirit magic, and his frost attacks are particularly powerful. His time on the run gave him good survival skills and knowledge of the wilderness. He is also intelligent and diplomatic, and encourages the leaders of the Inquisition to solve things peacefully.

Rodrik was born in 9:12 Dragon and is the youngest child of Bann Jon Trevelyan and his wife Lady Mara, although he is only younger by Elise by a few minutes. With a rather large age gap between the twins and the rest of his family, he and Elise became very close as children and could often be found making mischief around the family's estate. Both twins were rather devout as children, but while Elise remained staunch in her faith, Rodrik's declined a little bit after entering the Circle.

When Rodrik was ten, his magical abilities manifested themselves at the worst time possible. During a feast with the leader of Tantervale, Rodrik got bored and ended up freezing the dinner table. Everyone recognized the source almost immediately, and knew that Rodrik was a mage and therefore trouble. His parents, horrified at having a mage son, locked him in his room until the Templars came for him the next day.

After Rodrik was sent to the Circle, most of his family disowned him, with only Elise bothering to keep in touch with him.

Rodrik spent the next seventeen years rather quietly at the Ostwick Circle of Magi. His apprenticeship was a mostly uneventful one, and he was recognized as one of the most talented apprentices at the Circle alongside his three best friends: Samuel Amell, one of three mage siblings from Kirkwall sent to separate Circles (and the younger brother of Jocelyn Amell), Emery, a peasant girl from Amaranthine who was an exceptionally skilled healer, and Melara, an elf from the Ostwick alienage. All four passed their Harrowing at about the same time and became full mages.

The four were known for their differing views on the Circle. Samuel was a devout Andrastian and a Circle loyalist, Rodrik and Emery called for serious reform but not total independence, and Melara was a staunch Libertarian who believed in mage freedom and independence from the Chantry. The four could often be seen in serious debate around the tower, but they were almost always civil about it.

As Rodrik got older, however, he began to notice serious problems with the Circle. He found what he could study was very limited by the Chantry, with certain subjects being looked down upon by the Templars. After his apprenticeship was over, he was only allowed to leave once, under supervision, to visit the Starkhaven Circle and talk to one of his correspondents there. Samuel and Emery were briefly sent to the Gallows to aid the city after the Qunari invasion and returned with horror stories. Emery had gotten a beating from a Templar when she mouthed off to him, and a heartbroken Samuel reported that his older brother had been made Tranquil against Chantry rules. All of this led Rodrik to become far more outspoken about reform of both the Circle and the Templar order; at least for a little while. Then Ser Edric came to the Ostwick Circle, having been transferred from the Wyncome Circle. Ser Edric was a bigoted man and an enemy of Elise's who's transfer and fall from grace had been her fault after she caught him trying to force himself on a mage. And when he found out that Elise's brother was a mage in his new home, Rodrik quickly became his biggest victim.

Ser Edric took pleasure in bullying Rodrik, restricting his movement and keeping him from seeking leave, and threatening his apprentice Oliver with Tranquility if he tried to report his abuse to anyone. Melara, who tried to defend him, became another target of his ire; Edric would only refer to her as a "knife-eared bitch" and was caught and reprimanded for trying to watch her bathe a couple of times. As a result, Rodrik became quiet and withdrawn, and forced to keep silent about it for fear that it would make the bullying worse. He rarely left his quarters except to eat and for his training sessions with Oliver. Everyone who saw him noticed just how miserable he was but didn't know how to deal with it.

Fortunately, his abuse only lasted for a year before the Ostwick Circle rose up after the Kirkwall Rebellion. Ser Edric tried very hard to kill Rodrik during the chaos and badly scarred his face, but he was killed rather cruelly by Melara and her apprentice Roslyn, who turned powerful entropy magic on him and slowly drained his life force until there was nothing left. In the end, Rodrik, Melara, and Roslyn all survived, along with Samuel, Emery, and Oliver. They fled into the wilderness outside of Ostwick and eventually found themselves in the Frostback Mountains.

The six nearly died there several times and suffered from starvation, exposure, and attacks by both darkspawn and wild animals. Eventually they were cornered by Templars in a mountain pass near Haven and were only saved due to the intervention of an apostate mage who called herself "Joss". With her help, they killed the Templars, and Joss led them into Ferelden, where Queen Anora had given shelter to any mage who needed it. It was only after they went to Redcliffe and saw a statue of their savior that they realized that the mage who had saved them was the Hero of Ferelden herself.

The six ended up wandering the Hinterlands, aiding the refugees where they could. Not long after the explosion at the Conclave, Elise, who had long since left the Templars, sprung out of the Fade after the destruction, and been declared the Herald, arrived in the Hinterlands herself seeking aid for the new Inquisition. After two decades, the twins were reunited, and Rodrik and his friends pledged their support to the Inquisition and joined her.

Rodrik quickly joined the Inquisition and with his help, Elise was able to get the support of the rebel mages, making a full alliance with them. While the mages were originally successful in closing the breach, their happiness turned to horror when Haven was attacked by an army led by Corypheus and the former Templar Samson.

Rodrik survived the battle of Haven and helped Cullen get the survivors to safety. Upon Elise's return to the survivors, he helped heal her and deal with the exposure she was suffering from. Later, he fully supported his sister when she was named as the Inquisitor.

While Rodrik was present at Adamant, he never entered the Fade. And while he hated what the Wardens had done, he ultimately supported his sister's decision to recruit the survivors to the Inquisition, feeling that it was better to have them where they could be watched for signs of corruption.

He was also present at the Winter Palace ball, where he shared a dance with Josephine.

Later, Rodrik was also present when several members of the Inquisition encountered the Well of Sorrows. He didn't trust Morrigan and offered to drink from the Well himself, but Elise forbade him from doing so.

While Rodrik wanted to accompany Elise when she finally faced Corypheus, she refused to let him come, as he had been seriously injured during the battle in the Wilds and Elise didn't want that coming back to bite him. He was left to defend Skyhold with the advisors in case Corypheus chose to attack there.

Rodrik spent most of the Council alongside Josephine and Leliana, trying to root out Qunari spies and keep the leaders of Ferelden and Orlais occupied. He was terrified for Elise and worried that the Anchor would finally kill her, and while he hated that she ended up losing an arm, he was glad that it allowed his sister to survive. After the Inquisition was downsized, Rodrik chose to leave with Elise's blessing and chose to go to Ostwick to help rebuild its Circle as part of the independent College of Enchanters.

Shortly after returning to the Ostwick Circle (now called Ostwick College as an independent organization), Rodrik was elected to be its First Enchanter and spent six months helping it rebuild and reform. However, after the six-month period of reconstruction, he chose to leave, passing the position to his friend Emery. He moved to Antiva to live with Josephine and was completely accepted by her family, and the pair are considering marriage but haven't quite gotten the chance to tie the knot yet. Still, they want to be together for as long as they can, especially with the threats looming on the horizon.

Rodrik's twin sister and the only member of the Trevelyan family who still talks to him. The twins are very close and would pretty much do anything to help each other.

Rodrik's three best friends in the Circle; they would escape together during the rebellion (with Melara saving Rodrik from death during Ostwick's uprising) and they later joined the Inquisition together. The four are very loyal to each other and became key figures in helping the Inquisition's mages carve out a place for themselves.

The Inquisition's diplomat quickly charmed Rodrik with her kindness and intelligence, and Rodrik was completely smitten with her before he knew what hit him. After dueling her fiance, the two of them entered into a very happy romantic relationship and Rodrik moved to Antiva to stay with Josephine and her family. 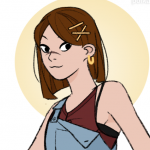