“They don't need to love you as long as they fear you."

Neria Surana, an elven mage of the Circle of Kinloch Hold. She became the Hero of Ferelden, gaining the ranks of Warden-Commander of Ferelden and Arlessa of Amaranthine.

Will kill bad guys for their robes. Also for being evil. But. You know. Evil wears nice robes.

Neria Surana is a City Elf; 5'1 tall and of very frail build until her Arcane Warrior training forces her to build up muscles. Her hair is naturally brown, though she has been using potions to dye it silver-white for years. Her eyes are blue. She wears vallaslin (of her own making.)

She likes garish make-up and colorful clothes. The brighter and more gem- and glitter-encrusted, the better.

Pragmatist in warfare, pessimist about the nature of people. Edgelord mage with a love for everything sparkly, and for Walking Bombs - the best thing ever. Has no memories of her life prior to the Circle. Pre-Blight Loyalist not out of love but convenience for her Knight-Enchanter ambitions, Aequitarian by the end of it.

Neria excels at deception and persuasion, she can make herself superficially beloved by giving people who they want her to be - but struggles to make genuine connections when she's just being herself. When she is not playing the cheerleader she is a solemn young woman prone to dark moods and darker thoughts. She is quick to frown, slow to anger and slower to laugh. Grudges she will nurse for years over the pettiest reasons but her loyalty, once gained, is unshakeable.

Neria sees herself as the one who must make the tough decisions and take the blame if need be, which sets her apart from her companions whom she cares for but finds hard to confide in. Her focus on the greater good can come across as callous towards individual suffering. Despite this, she usually makes moral choices. She may not have the best moral compass herself but she is drawn to people with strong convictions and tries to make decisions which would please them.

Neria's greatest flaw is that she is smart - but never quite as smart as she believes herself to be. Her plans are brilliant, with fallback plans for the fallback plans, yet she tends to lose herself in all that convoluted detail and overlooks the most obvious flaws. Her youth and lack of experience in the world outside the Circle will trip her up time and again.

Neria Surana was born to the alienage of Gwaren, the fourth child of the elven laundress Lindirae Surana. Her father, a dock worker, had left the family when her mother was pregnant with Neria, breaking under the pressure of one more child to raise in poverty. Neria was a precocious child, she fussed little but was almost eerily aware of her surroundings and she had an air of strangeness around her. When she showed signs of magic her mother rejoiced, for in her mind the Circle meant Neria would grow up never knowing hunger or cold. Thus, she gave her up readily to the Templars even as she mourned the daughter lost - with the shem, Neria would have a better life than she could ever hope to give her.

In Kinloch Hold, everyone was astounded by Neria's young age. The toddler was the youngest mage Kinloch had seen in years. She came to be primarily in the care of Senior Enchanter Reinette, a retired Knight-Enchanter who had been recently transferred from Montsimmard as she wished to see foreign lands one last time before she died. While the lady's body was frail with age, her mind remained sharp and she saw the same keen mind and burning ambition in Neria that would have been priced in Montsimmard, while in Kinloch it was regarded with suspicion. She fostered these traits in Neria, while at the same time teaching her to hide them.

Far more interested in Reinette's teachings than play with the other children, and then showing a knack for eerie and disturbing Entropy spells, Neria became a loner among her peers. Her only friend was Jowan, a human mage a few years older than her, whom she loved like a brother.

Neria was twelve years old when Reinette died - and with her, Neria's childhood. It was time now to put Reinette's lessons to good use.

Neria was gifted but not scholarly inclined, she learned better by trial and error than through books. The only use she had for these was as inspiration, and to feed her hunger for grandiose tales - partly through Reinette, Neria had developed an unquenchable thirst for the stories of great kings and generals, for valiant deeds and heroic victories. Between Reinette and her history books, her ambitions were already set: she would become a Knight-Enchanter and maybe one day, First Enchanter of her Circle. Once her choice was made, Neria pursued it with the ruthless ambition Reinette had fostered. Only a loyal mage would be given the Chantry's dispensation to study Knight Enchanting, so she became the most loyal a mage could be - the best weapon the Chantry could wish for. She studied with First Enchanter Irving himself, often serving as his assistant or scribe in addition to her studies, for there was no mage more loyal than her. She showed great promise both in Entropy and navigating Circle politics.

Socially, Neria felt ever more alienated. Jowan remained her steadfast friend but otherwise, she was desperately lonely. It is in this context that it is easy to understand why she fell in love with Cullen Rutherford, a young Knight-Templar newly assigned to Kinloch. It is this which explains why ever pragmatic Neria gave herself to fanciful daydreams of true love conquering all, pinning all her hopes for a happier life on him. Neria was desperately lonely, and desperate, for she was caught in a trap of her own making and could not even seek to escape it for fear of losing everything she was working for.

That is not to say Neria never rebelled in her own little ways, for she did. Quite spectacularly, indeed. Her vallaslin is a sign of it, for at thirteen she had her Dalish phase, culminating in giving herself vallaslin or the closest she could get anyway. There was her Andrastian phase, where she delighted in tormenting everyone with over-the-top piousness, and of course, Neria has always shown a fondness for the macabre and bizarre - and never had much inclination to hide it, not even in the interest of appearing unthreatening.

Neria wasn't happy when her friend Jowan asked for her help to steal his phylactery so he could flee with his girlfriend Lily, but between her own romantic daydreams and her conviction that she could outsmart everyone in the tower, she reluctantly agreed to help. It was probably the only time in her years in Kinloch that Neria did something truly selfless - and it cost her everything.

"Taking back the city is easy. We just have to kill them all."

Here's what happened with the companions, yo.

The love of her life.

Babe is her faithful Mabari, who can do no wrong in her eyes and gets to sleep in the bed with her (Sten claims she stinks of wet dog, likely a result of this.)

Neria Surana is well-known for fighting with sword and shield rather than a mage's stave - though this appears far less reckless once you know she is an Arcane Warrior. Her trademark set of weapons consists of Maric's Sword, the longsword wielded by King Maric and King Cailan, and Cailan's Shield, a kite shield. While she does in fact use staffs at times, and usually carries one into battle (though she does, indeed, seldom use it) these are mere easily exchanged tools for her. Cailan's Arms are a symbol.

This is the sword which first liberated Ferelden and then saved it again by slaying the archdemon Urthemiel - history and glory which Neria, forever aware of the power of symbolism, greatly values and knows to use to her own ends. Although she would never admit it, she also takes grim delight in wielding a royal sword. Namely, her royal father-in-law's sword: a subtle reminder to the powers in Denerim that she is wife to the man who could have been king.

For years, she keeps regularly using the armor Master Wade made her from the bones of the High Dragon found at the Temple of Sacred Ashes, Wade's Superior Dragonskin Armor. Another choice made for symbolism, though she finds the armor downright offensively ugly. But it is the one in which she defeated the archdemon. People take heart when the Hero of Ferelden comes to them looking like she does in the heroic paintings (and are more likely to overlook her pointy ears in their awe.) She starts wearing it again when she returns to Ferelden after the hunt for the Cure, to remind the Chantry that it was only her slaying the dragon which permitted them access to the Temple in the first place. 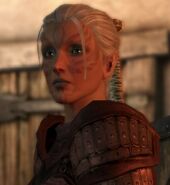 Moments of peace with Alistair
Add a photo to this gallery
Retrieved from "https://daoce.fandom.com/wiki/Neria_Surana_(A_rtemis)?oldid=11927"
Community content is available under CC-BY-SA unless otherwise noted.