Marian Aetheldaeg Hawke, also known as the Champion of Kirkwall, is the oldest child of Malcolm and Leandra Hawke, and the oldest sister of twins Bethany and Carver Hawke. Resilient, diplomatic, and protective of those she loves, Hawke ends up caught in the crosshairs of the fragile system of Kirkwall. To save her city, she must sacrifice everything.

This page is a work in progress :)

Marian Hawke has short, curly black hair and hazel eyes that offset tanned skin. Freckles pepper her round face, and she looks nothing like her mother or siblings, having taken heavily after Malcolm. She is 5'7" (170.18 cm), with a curvy and muscular frame.

Diplomatic, helpful, and kind to a fault, Hawke is always willing to offer a helping hand to those in need. A "Blue Hawke" by definition, Marian also treads into "Red Hawke" territory when someone threatens her family or friends. But do not think she does not have a sense of humor -- her humor is dry, but can be boisterous and on the nose in ridiculous situations.

Legacy and Mark of the Assassin DLCs

Friendship with everyone, romanced Fenris, Anders was not killed.

So young and full of happiness in the prologue!

Act 1 Look AKA "I just cut off all my hair and now it's growing back awkwardly."

Before fighting the Alpha Wyvern in the MOTA DLC

Marian's tarot (Eight of Swords) by le-moon on tumblr

Marian Hawke by ryfoxx on tumblr 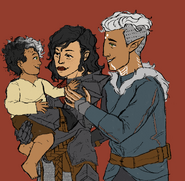 Marian, Fenris, and their son Carver Jr. by Gliscor on tumblr 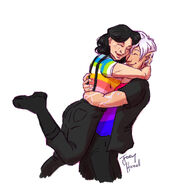 Marian and Fenris by joeyhazell-art on tumblr
Community content is available under CC-BY-SA unless otherwise noted.
Advertisement