After the Fifth Blight ended, Lariel and Alistair remained in the Grey Wardens together. She took the title of Warden-Commander Tabris and helped rebuild the order at Vigil's Keep. As the years passed, Alistair and Lariel traveled across Thedas as Grey Wardens. Though she left his side for a while, to pursue a cure for the Calling, after Corypheus' defeat they were reunited again for good.

Lariel's first kills and how they affected her

Valentine's day fluff: How she would describe Alistair (and vice-versa), and how their relationship developed

It's a scorcher - Where Lariel hangs out on a hot day

Family Feelings - What it says on the tin

Faults & Flaws - Lariel is a snoopy, nosy, know-it-all who doesn't even lift

Tattoos - What it says on the tin

Advice - Lariel offers up some advice on life

Relationship Irks - what drives Lariel nuts about Alistair and vice-versa

Social Media - What it says on the tin

Lariel as a Companion Hypothetical romance guide for Lariel

First Breath - A scene from Lariel's childhood wherein she sneaks out of Denerim for the first time.

Catch-up Week - An angsty six-sentence prompt, and a pregnant pillow talk prompt. (disclaimer: I hate this one now but I'm keeping the link here in case I ever want to find it again for some reason)

Blight Geeks - AO3 - In which Sten tries to teach the gang to fight. It's literally just a Spongebob parody.

A Bitter Choice - AO3 - On the eve of battle, Lariel talks to Alistair about doing the Dark Ritual. A rewrite/reimagining of the canon scene, because the canon scene is, how you say....trash. 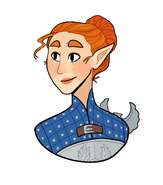 Add a photo to this gallery
Retrieved from "https://daoce.fandom.com/wiki/Lariel_Tabris?oldid=11327"
Community content is available under CC-BY-SA unless otherwise noted.