THIS IS WHERE YOUR CHARACTER SUMMARY GOES. BLAH BLAH, BRIEF OVERVIEW

Here's what Your OC is good at, jabroni. Doesn't have to just include killing things, though let's be real, it probably includes killing things.

Here's what happened before the events of the game, son.

Here's what happened with the companions, yo.

Iliana Lavellan was trained to become a storyteller, when the mage/templar war broke out. She was always good with telling stories, singing and especially finding and creating new tales. She wasn't just content with reciting the old Dalish tales, she was searching ruins and asked the people, who traded with her clan about more stories and songs. SInce clan Lavellan was always more open towards the other races than most of the other clans, they traded a lot with humans and dwarves, giving Iliana the opportunity to collect quite a lot of stories, songs and poems. She  also learned to play the lute, a human instrument, she loved, since she first heard a gril playing it in a tavern. She happend to save that girls life, who gave her the lute in gratitude.

Her parents, who are both hunters, wanted her to be able to defend herself too, so apart from her training as a storyteller, she learned to figh twith a bow. She isn't the best archer of the clan, but she is decent with the bow and still learning.

When the templar/mage war broke out, clan Lavellan tried to stay out of it. But one day, one of the clans halla carers were caught in the crossfire between a group of mages and templars. They killed two hallas and did hurt Myala, the carer, badly. She still has scars from a fireball and an arrow. The clan had to step in in order to save Myala and the rest of the hallas, so they had no choice but to kill the renegade mages and templars. After that keeper Deshanna Istimaethoriel send a note to some cleric, who she knows for a long time to report what happened. The cleric told her  that the chantry tries to settle the disput with a conclave, where the fighting mages and templars can talk and maybe come to an udnerstanding. The cleric invited an envoy from teh Dalish to attend and the keeper accepted.

Iliana was send with a few hunters and the clans first to the conclave to observe and report about it. When the conclave was  destroyed, Iliana was the only one to survive. She did send word to the keeper about the death of her first and the hunters an the keeper promised to stay in contact. Despite mourning the death of their clans mates, the Dalish were glad, that one of them has the opportunity to help restoring the order in Thedas and maybe showing the humans, that their predjudice against elves are just that, predjudices.

Iliana is curious by nature and very open minded. She is mostly easygoing and fun loving and not above doing some mischief. She does go along well with other races, ebcause she is a good listener and people easily trust her. Being able to sing human songs in human settlements or dwarven songs in dwarven settlements helps a lot to build trust.

She likes to jump into adventures and uses every opportunity to go out and see the world. While she doesn't like, that the humans make a fuss about her and calling her Herald and Inquisitor, she does like the opportunity to see parts of the world, she normally wouldn't have able to visit. 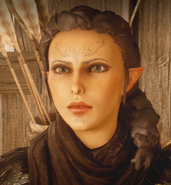 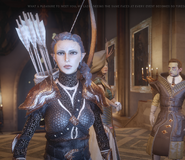 Add a photo to this gallery
Retrieved from "https://daoce.fandom.com/wiki/Iliana_Lavellan?oldid=2455"
Community content is available under CC-BY-SA unless otherwise noted.