"Lightning can be dangerous, even deadly - one need only witness a single lightning storm to understand this. It is not easily contained, nor controlled, and behaves erratically in nature. For this reason many scholars and practical mages have written off most forms of storm magic as unworthy of further examination or refinement. However, is something deemed useless simply because it is difficult to understand? How many forms of magic that we now consider commonplace were once deemed impossible or unworthy of study? There is great potential in the untapped resources of storm magic, if only we would take the time to find them."

- Excerpt from a dog-eared volume titled Potentia Tempestatis. The author's name has been carved off the cover and repalced with 'Idhren Cyrus Lavellan' written in neat script.

Idhren stands at a scant 5'3" and has spent most of his life being just this side of too skinny. Though he's built up some muscle over the past couple years, describing him as anything more than lithe would still be a wild exageration. He has medium brown hair that he wears in an undercut, cropped short on the sides and the top not quite long enough for a ponytail, although after the war with Corypheus he grows it to that length.  Most striking about Idhren's appearance are his violet eyes.

For most of his life Idhren suffered verbal, emotional, physical, and sexual abuse, and these experiences still weigh heavy on him. He carries with him a great number of insecurites and fears that he goes to great lengths to hide from anyone else. This experience also led to a rather jaded and fatalistic world view.

Chief among his fears is that of losing people or things he cares about - having been unable to free his family from slavery, and later suffering the loss of his fiance. This makes him incredibly protective of his friends and loved ones.

Idhren has a quick and fiery temper and a fearlessness not proportional to his size. He is brave to the point of recklessness, but not unaware of his smaller stature. Idhren is merely incredibly confident in his abilities as a mage to protect him from even the largest dangers. In general, Idhren's bark is worse than his bite. He talks a big game, but would never harm someone without good reason.

Conversely, Idhren can be incredibly patient with others when he needs to be. He is surprisingly good with children and enjoys sharing his knowledge with others.

Idhren is a certifiable genius. A child prodigy, he literally wrote the book on storm magic at the age of nineteen: Potentia Tempestatis. In truth he's never stopped his research on magical theory, taking notes wherever he goes. Idhren also speaks three languages: Common, Tevene, and a smattering of Elvhen.

Born a slave in Tevinter, Idhren's prodigous skill at magic earned his freedom at the age of thirteen. His former master sent him to the Circle of Vyrantium for training in magic with the goal that Idhren would someday serve as his apprentice. Idhren's time at the Circle was rife with bullying and abuse, but he excelled at his studies despite this; the Circle is also where he first met Dorian.

After leaving the Circle, Idhren served as Canidius' apprentice for several years, however it was not as he had expected as a child. Canidius was manipulative, using Idhren's family (all still slaves) as leverage to ensure cooperation, belittling his studies, and even plagiarizing Idhren's research. To help cope with this abuse and the lingering trauma of the Circle, Idhren turned to alcohol and lyrium abuse and the company of an elven whore named Varius.

The life of a slave is not easy, and eventually all of Idhren's immediate family succumbed to fatigue, illness, or injury. Without them, Canidius had nothing with which to control Idhren, and the elf soon took his leave of the magister and Tevinter, fleeing south to join a clan of Dalish elves in the Free Marches.

Living among Clan Lavellan Idhren enjoyed a happiness he hadn't known was possible. The Keeper became like a second mother to him, and he met and fell in love with Tainan, one of the clan's hunters. They became engaged within a year of Idhren's arrival, but plans for a wedding were never made. Years later, Keeper Istimaethoriel sent Idhren to observe the Conclave because of his familiarity with human politics and religion. Tainan accompanied him on the journey, but did not survive the explosion.

Idhren spent the early days of the Inquisition wracked with grief following Tainan's sudden death. He was short-tempered, guarded, and fell back to the familiar escape of alcohol and lyrium. Not particularly good leader material, which made it all the more surprising when he was named Inquisitor.

Eventually, and with the help of a few close friends, Idhren pulled himself out of his mourning and dedicated himself to being the leader the Inquisition needed. As Inquisitor, he used all the political skills that Canidius had taught him to gain the Inquisition as many allies and supporters as possible.

With the rebel mages as allies, he turned Skyhold into a place for magical research and learning. The Grey Wardens were offered a chance for redemption after the disastrous events at Adamant Fortress that included the loss of Warden Stroud. In Orlais, he maintained the status quo by foiling a plot on Empress Celene's life and ensureing she kept her throne, and somehow managed to help smooth out some of her personal squabbles on the way. In the Temple of Mythal his thirst for knowledge won out over the need for expedience and Morrigan's objections, leading him to form a tentative truce with the Sentinels there and drink from the Well of Sorrows himself.

Over the course of the war, Idhren's friendship with Dorian evolved into a romance which continued even while Dorian returned to Tevinter following the defeat of Corypheus.

After the Exalted Council and the disbanding of the Inquisition Idhren stayed in the south only long enough to heal from his injuries and wrap up any loose ends. Skyhold was gifted to Grand Enchanter Fiona and the remaining free mages to turn into a College of Enchanters free from Chantry scrutiny and restrictions.  Finally, he joins Dorian in Tevinter under the guise of "retiring". The two marry and eventually adopt a half-elven boy named Sylvan. Idhren establishes a faction of the Friends of Red Jenny in Minrathous; their work focuses on helping slaves escape and "sticking it to evil magisters". 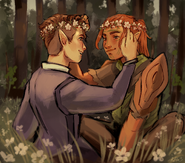 Idhren and Tainan by kf1n3
Add a photo to this gallery
Retrieved from "https://daoce.fandom.com/wiki/Idhren_Lavellan?oldid=11318"
Community content is available under CC-BY-SA unless otherwise noted.