“Look, I'm not saying we should kill him. I'm just pointing out that he wouldn't be missed.”

Garrett Bartholomew Hawke is the older twin brother of Lyra Hawke, the Champion of Kirkwall.

Upon the death of their father, Malcolm Hawke, Garrett and Lyra took charge of the family. While they were both in charge, Garrett was often protective of Lyra, who was only a few minutes younger than him. For this reason, one could say he was the family's protector, and was one of the reasons he was resented by Carver. Bethany, on the other hand, he got along with very well.

Garrett went with Carver to fight at the Battle of Ostagar. When it was clear that the only thing awaiting them in Ostagar was death, the brothers returned to their family and eventually made it to Kirkwall, along with Aveline Vallen.

Garrett, Lyra, and Carver made a deal with Varric Tethras that they would partner for the Deep Roads expedition. Lyra and Garrett, as usual, took charge, sometimes changing who would lead, with one staying at home and the other going out to earn money, and other times they would go out together.

At several points, while earning money, the two Hawkes ended up in the presence of the Arishok. Garrett was against this at times, but he went at urging of his sister. However, due to his insistence, Lyra was the one who always talk to the Arishok since Garrett claimed, "that man scares the shit out of me".

In Act II he began a physical relationship with Isabela, who later ran away with the qunari relic. When she returned the book, both Garrett and Lyra refused to hand Isabela over. Due to his respect for Lyra, the Arishok offered to fight her for Isabela. Garrett, concerned for his sister, insisted he do so on her behalf, but the Arishok refused, saying that he was "not worthy".

In Act III, when his sister is forced to choose between siding with the mages and the templars, Garrett made it clear that he would be by her side no matter what. When Lyra asked for opinions on what to do with Anders, Garrett agreed with Merrill that Anders should help clean up his mess.

When word of a possible Exalted March on Kirkwall comes, Lyra, Fenris, and Anders decided to leave, as well as Molly, who had been warned that she was no longer safe in Kirkwall. Garrett remained in Kirkwall, him and his friends seeing off the four on the day they left.

With Kirkwall a mess, Isabela left the city with Garrett by her side. As they were never in one spot for too long, it was often difficult to stay in touch with Lyra. At one point, Garrett, Isabela, and Varric went on a quest to help King Alistair find his father.

Anders: Garrett thought that Anders was a good person, if a little boring. He appreciated how Anders cared for people in need, and though he was good at hiding it, he was always slightly perturbed by the fact that Anders had merged with Justice. Garrett was aware of Ander's crush on Lyra and was extremely against it; though he thought of Anders as a friend, he thought he was too radical and unstable to be with Lyra without hurting her in the end.

Carver Hawke: Carver views his siblings as rivals who are always trying to steal the spotlight as they prove that they are the protectors of the family. As Garrett coddles even Lyra, Carver especially feels this way about his older brother. He joined the templars to keep them off of Lyra, but also because he wanted to make his own way. For a long time Garrett and Carver were on rough terms because of this, though Garrett eventually grew to understand Carver's motivations, and their relationship became much less tense, especially after defeating Corypheus. Despite their arguments, the two of them care for each other, with Garrett being very protective of his younger brother.

Fenris: Garrett was never intimidated or deterred by Fenris' cold demeanor. They often played cards together at the Hanged Man, which eventually developed into a good friendship between the two.
Despite Garrett seeing Fenris as a good friend, when he first noticed Lyra's interest in the elf, he was immediately against it. Garrett urged his sister not to try and pursue him, saying that she would only end up hurt. In the end, she did. When he came home and heard Bodhan say that Lyra was in her room, crying. After Garrett eventually found out what happened, he went to see Fenris. He said that he hoped that there were no hard feelings and that he had to do this as Lyra's brother, and then proceeded to punch Fenris.
When Lyra later got back together with Fenris, Garrett warned Fenris that if he hurt Lyra again, he would kill him. Despite this, Garrett was fairly certain that he would not have to worry about Fenris breaking his sister's heart again.

Isabela: Isabela and Garrett are both friends and partners in crime. Their lighthearted attitude and willingness to let things go allowed for them to get along well. They started a physical relationship which eventually developed into something more.

Lyra Hawke: Despite being only a few minutes older than her and the two sharing the responsibility of taking care of their family, Garrett plays the extremely protective older brother when it comes to Lyra. The two have always been attached at the hip, with the Battle of Ostagar being the first time they had ever been apart. Garrett is willing to beat up anyone who hurts his sister, despite Lyra's disapproval of this.

Merrill: Garrett thought Merrill was adorable, and he enjoyed spending time with her and teasing her to some extent. Though he disapproved of Merrill's blood magic and agreed with his sister, who kept Merrill from fixing the Eluvian, Garrett always kept his opinion to himself.

Molly: He does not see her as a replacement for Bethany, but Garrett does see Molly as a younger sister. She was very tightlipped and cautious at first, but Garrett was one of the people who managed to get her to loosen up and reveal her true self. When he found out about Molly's past and the fact that she was a mage, while shocked at first, he got over it extremely quickly.
When talking to Molly and Rilsi in Skyhold about Tommen, Garrett agreed with Rilsi, telling a hesitant Molly that killing Tommen was the best course of action.

Sebastian Vael: Though he did not hate him, Garrett found Sebastian extremely annoying with his constant preaching. Ever since Sebastian declared war against Kirkwall, Garrett has considered him an enemy.

Varric Tethras: Varric, Garrett, and Lyra have all been with each other since the beginning and are extremely close friends. Varric is a confidant when Garrett feels that he cannot share his worries with Lyra, and he has always had the twins' backs and vice versa. 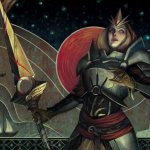