"Don't worry. Helping people and killing people are what I'm best at."

Eryn Hawke (born 9:06 Dragon) is a rogue hailing from Ferelden, and the Champion of Kirkwall.

Eryn is a skilled archer.

Here's what happened before the events of the game, son.

Malcolm and Eryn had a close relationship. Both had a similar sense of humour and got along famously. When Malcom became terminally sick in 9:27 Dragon, he entrusted Eryn with the role of the head of the family.

Leandra and Eryn had a fairly close relationship. When Carver died during their escape from Lothering, Leandra lashed out at her oldest child and blamed her for not protecting Carver. While Eryn knew her mother said this out of grief, she still felt hurt nevertheless. Leandra later apologized for her behaviour and Eryn accepted the apology. The Deep Roads Expedition was a financial success, and soon after Eryn was able to buy Leandra's childhood home. But despite the effort to protect her mother from any harm, Eryn failed to keep her safe. Her mother was killed in a sick blood magic ritual. Losing her mother in such a gruesome, sick way destroyed Eryn. While she was able to keep up appearances for a while, she later succumbed to alcoholism to drown out her sadness. It took her over a year to sober up again.

Eryn and Carver always had a strained relationship dominated by the rivalry between the two siblings. Carver loathed being in the shadow of his big sister, and Eryn likewise loathed Carver's aggressive behaviour towards her, which constantly put the two at odds. Despite all this, Eryn was devastated when Carver died during their escape from the Blight.

Unlike Carver, Eryn and Bethany were always close. Due to Bethany's magical talents, Eryn had been very protective of her from an early age on, and Bethany always looked up to her older sister. However that changed when the sisters set out to an expedition into the Deep Roads. Bethany caught the blight sickness and would've died, if it weren't for Anders and the Grey Wardens. Warden Stroud agreed to let her join the wardens and took Bethany away with him. For months Eryn didn't know if her younger sister was dead or alive, until finally a letter adressed to her mother arrived. Bethany had survived the Joining and was now a Grey Warden, but her attitude towards her older sister had changed. Being forced to carry the heavy burden of a life as a warden made her resentful towards Eryn, who escaped the Deep Roads unharmed and was free to live her life the way she pleased. Years later, after the Explosion of Kirkwall's chantry, Bethany came to Eryn's aid and expressed her remorse for acting so cold. Finally thanking her Eryn for saving her life, the two sisters were reunited again.

Eryn initially thought him to be a sleazy, selfish and jealous bastard who could not be trusted, and this opinion of him stuck for years. After Leandra's death and falling into an endless spiral of alcoholism and depression, it was Gamlen of all people who helped her out first. She finally softened up to him and saw the sad, broken man under his mask. When Eryn met Gamlen's daughter Charade, she encouraged the young woman to meet with her father, because Gamlen deserved to experience a bit of happiness. 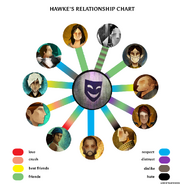