"She will tear the world apart before she lets herself be broken."

She is the Hero of Ferelden. The Warden Queen. To the world, Demetria Cousland is a strong, powerful, graceful figure that saved the world. To her friends, she is raw, unbridled, and a truly remarkable soul.

Like her mother when she was young, Demetria has bright red hair that she keeps cropped at about her shoulders. It's often tied in a small bun. She is about average-to-short height--around 5'5"--and has a muscled, fit figure.

From a young age, Dem was known to be pragmatic and disciplined, but good-humored, clever, and witty. Always a natural leader, Demetria is decisive and levelheaded, never accepting failure or defeat. This goes both ways; her stubbornness is, as her father always said, is her greatest flaw. Her parents encouraged her skill at leadership, and never held back from letting her take agency into her own hands. Though she was the second child, she was given the same education and opportunities as her brother.

After her family is murdered, she deals with overwhelming amounts of grief and stress. For the entire year of the Blight, she deals with unexpected rage, nightmares, and deep feelings of despair. She relies heavily on the friends she makes, especially Alistair.

Violence was a part of her life every day during that year of the Blight. Demetria practiced mercy where she could, offering many second chances and letting others live. However, for those who wronged her, liked Teryn Loghain and Arl Rendon Howe, her judgement was brutal.

Because of the depression and trauma she went through, she is slow to trust. There becomes a bit of a divide between how people who know her and people who don't see her. Sometimes she comes off as cold or uncaring. She struggles to befriend people who either weren't with her during the Blight or aren't other veterans/Wardens.

She cares little for her fame and instead takes her position as Queen and Warden-Commander very seriously. However, she does consolidate and protect her power. When the Landsmeet began, Demetria did what she could to secure Alistair and herself power. She truly believed Alistair was the rightful king, but also that she deserved to be his Queen. Some consider this righteous, others pragmatic, and others still power-hungry.

To her friends, however, they know her sense of humor, her sarcasm, her ability to listen and connect with others. Her friends consider her one of the most compassionate people in the world, but it takes a long time to see that side of her. She is selfish, stern and flawed, but forever loyal and loving to her cherished ones.

Demetria deeply loved her family, and was especially close to her father. Their family was very close-knit, and she admired both her parents.

Because of all the stories she heard about her parents, especially her mother, she spent most of her childhood and early teenage years in the practice field. Her parents encouraged her to train with a sword and shield the moment she announced she wanted to learn. With the best tutors and a fierce devotion, she quickly became a skilled fighter with bow, sword, and hand-to-hand.

When the Blight began, she resented not being sent with her brother to fight. Later, she would be thankful that her brother, Fergus, was sent away before Howe's attack.

To say the massacre of her family was devastating is an understatement. Duncan had to physically drag Demetria away from her parents. The rest of her trip to Ostagar remains a haze in her memory. Fortunately, Alistair and the increasing crisis with the Blight gave her purpose and a distraction from her grief. She quickly warmed to Alistair, whose sense of humor lifted her spirits.

Dem never wanted to be a Warden, but once she became one, she felt well-suited to it. To her, the mission was simple--and she could do simple. It wasn't easy. But she could do it for her family, for Highever. This single-minded purpose drove her most of the way. In general, she was willing to do whatever it took to stop the Blight.

King Alistair and Demetria Cousland married one month after his ascension to the throne. Their wedding was a huge celebration for a country that was more than ready to sigh a huge breath of relief. As Queen, Demetria was the decisive and composed hand that Alistair needed to guide him into being an effective ruler. Together, Alistair and Demetria were well-loved by the people, who saw the two as a devoted, decidedly Ferelden young couple who care little for politicking.

After six years of trying, the couple welcomed their first child--a girl named Eleanor, after Demetria's mother. The two were shocked and overwhelmed with joy. They raised their child with love, humor (dad jokes!) and the relief that the line of Theirin would continue. Many a song is sung about young Eleanor and her parents.

Despite hating the separation from her husband and daughter, Demetria embarked on a quest to stop the Calling in 9:41. She definitely comes back and lives happily ever after.

Meeting Alistair changed her life. Demetria's life was full of sorrow and pain, but Alistair's humor, friendship and eventual love kept her grounded and looking to the future. He is her first and only relationship. The two are utterly devoted to each other, and cannot stand being apart.

Demetria is always very close and fond of Morrigan. While Demetria has more empathy, she admires Morrigan's practicality and bluntness. The two call each other sisters.

Demetria was also very close to her other companions, every single one. They truly became a band of brothers and sisters.

Family time before the game starts 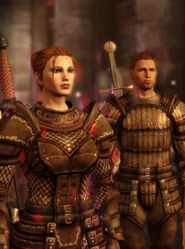 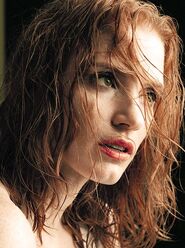 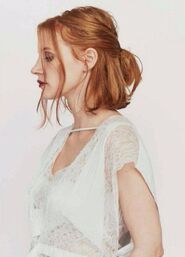 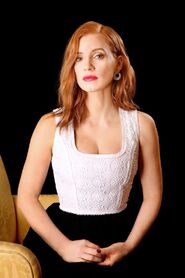 i love u jessica