Connor strikes an imposing figure, with perfect posture and an enigmatic gaze that reveals his quick wit. His green eyes may range in colour from a dark moss-green to emerald and even sea-green, depending on the light and his mood. Although of average height (5"9 /1.80m), he often appears taller. His hair is jet-black and always immaculately groomed. He places great stock in his appearance and has a taste for the finer things in life, which is expressed in his choice of wardrobe.

Some find him captivating, others exhausting. He has a mercurial mind, which expresses itself through his lightning-fast speech, emphatic gestures and easy-going mannerisms. He is usually the first to see the funny side to things, quick to make a joke, if perhaps sooner at another's expense than his own. His dry-witted sarcasm is certainly a very acquired taste.

He has had very limited exposure to any one outside of his direct circle of friends and family, was brought up to exemplify this birthright as a noble of the Free Marches and can come across as rather thoughtless and even callous when it comes to displaying understanding for the lower classes. It's not that he doesn't care, he simply can't fathom what it's like to not have wealth and status.

Major Affinity: Fire, Fire and more Fire. Life-long specialisation and fascination with everything even remotely related to this element. You say "Pyromaniac", he says "Pyromancer". Has developed several unique fire-based abilities. If an element/spell can be swapped with fire, you bet he's tried it and probably made it his own.

Oh, and water sucks. They don't call it a "wet blanket" for nothing. insert Connor smirk

Born in 9:9 Dragon as the youngest of three sons to Lord and Lady Trevelyan, Connor is the very much doted upon baby-boy. The apple of his mother's eye and always looked upon with indulgent amusement by the Bann himself, Connor grew up with the best life had to offer. He was a gregarious child and he can perhaps be forgiven for being a little oblivious to the needs of those around him, used as his is to have his every whim obeyed. Even when his magical abilities were discovered at age seven, the Trevelyans made sure he had the best of everything during his training in Ostwick, which made him very popular amongst the other apprentices. Helped by his brother Myron, who asked to be stationed at the Ostwick Circle after receiving his first philtre, they ran somewhat of an underground racketeering circle. It consisted mostly of trading favours or gold for goods that were hard to come by. Needless to say, Connor managed to shirk most of his chores by getting someone else to do them for him.

Despite being devout Andrastians and thus having their reservations towards magic, the whole family was more than supportive, right down to his older brother who became a Templar. Connor was to become a shining example of what a noble mage could achieve with the right background and resources and how magic could serve in that pursuit.

Whilst grateful for the support, Connor was not quite the picture of innocence his family envisioned him to be and he quickly discovered that the Circle offered a plethora of opportunities for someone with the right connections. With his oldest brother diligently climbing the ranks in the templar order, Connor had connections on all sides and never hesitated to call upon his brother's protection to get away with anything smooth-talking, charm and outright bribery could not get him out of.

He developed an early fascination and affinity to fire. Senior Enchanter Lydia often remarked that it should surprise no one that one with such an impish and mercurial temperament had a penchant for an element, which was by its very nature as unpredictable and hard to tame as he was. Conner always imagines this was said with the warmest affection, despite the scowl to the contrary. 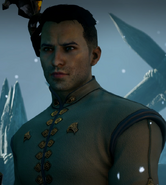 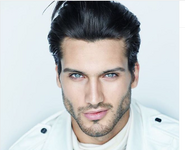 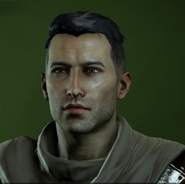