Ariana Trevelyan is the Bann of Southwatch, a wealthy, agricultural bannorn in the Free Marches near Ostwick, and the younger sister of Inquisitor Evelyn Trevelyan.

She cares deeply for the plight of others, leading to her involvement with the Free Marches' Mage Underground, the refugees during the Inquisition, and later in helping former Templars recovering from lyrium addiction.

Ariana struggles with her Andrastian faith and doubts the existence of the Maker, namely due to her belief that no creator would classify one of their creations as a "curse," as the Chantry has done with mages.

Her father taught her more traditional Marcher beliefs as well, which she practices at each of the major seasonal holidays and equinoxes.

Ariana Kalista Freyja Trevelyan was born on 2 Guardian in 9:16, the second daughter of Bann and Lady Trevelyan. As the younger child, she was prepared from a young age to marry within the nobility and improve her station.

Her sister, Evelyn, is taken to a Circle in Guardian 9:26. Their parents never tell Ariana where Evelyn was taken and they speak very little of her again.

After her parents deaths, Ariana becomes Bann of Southwatch in 9:29 at the age of thirteen. The Vaels, old family friends of the Trevelyans, help Ariana learn the nuances of being head of a noble household. Ariana falls in love with Lachlan Vael, heir apparent to the Starkhaven throne, and they plan to marry until his untimely death at Wintersend 9:31.

In 9:34, while searching for her sister, Ariana meets an apostate mage in Kirkwall named Anders.

When Ariana turns up in Haven shortly after the explosion, Leliana asks her to become an agent of the Inquisition to gather intelligence from the nobility. Josephine later asks her to serve as a treaty negotiator and diplomat.

She becomes an advocate for refugees fleeing the Mage-Templar War and the rifts appearing all over Thedas, often lobbying to other nobles and governments on their behalf. In Justinian 9:42, she temporarily moves to the Emprise du Lion to assist the village of Sahrnia with their rebuilding efforts at the request of the emperor of Orlais. 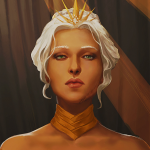